The PC-6001 mkII is backwards compatible with all PC-6001 games, but its new graphics modes allow for its own selection of software. 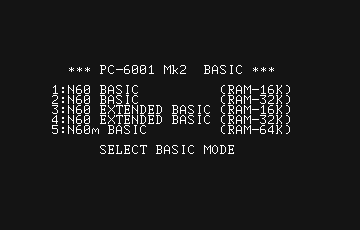 Boot up the system and you'll be given five BASIC mode options.

The PC-6001 mkII is an upgrade over the PC-6001, incorporating several of the computer's add-ons while adding some new features of its own. While the CPU was not changed, the mkII has 64KB of RAM (double the amount of an expanded PC-6001), a higher resolution text mode, and two new graphics modes, 320 x 200 (4 colours) and 160 x 200 (15 colours). Voice synthatsis is built into the machine by default, rather than requiring a separate purchase as was the case with the PC-6001.

Many of these new features are facilitated by the inclusion of a new form of BASIC, "N60m BASIC", however a desire to keep compatibility with the older PC-6001 means the system actually comes equipped with five variants of BASIC. Modes 1 and 2 emulate the stock PC-6001 with 16KB and 32KB of RAM, respectively, while modes 3 and 4 incorporate N60 Kakuchou BASIC, which required a separate cartridge on the older machine. As the computer continues to use the "page" system of dividing up memory, software was forced to supply both a "mode" and "page number" to ensure users would could run programs correctly.

As a result of this system, most mkII software is designed for BASIC mode 5 and will simply not load on an older PC-6001 machine. There are exceptions, however; the PC-6001 mkII version of Space Harrier for example uses mode 2; it can be loaded with an older PC-6001, but graphics will be corrupted and the game will inevitably crash when attempting to run.

Slight differences exist in how the PC-6001 mkII handles the older graphics modes; the text-based graphics mode 1 now uses white text on a black background, rather than two shades of green, and border colours are often different, with the mkII usually rendering black in the unused space.

The machine adds an RGB video output, allowing for much cleaner visuals when connected to a compatible monitor, and replaces the chiclet keyboard of the PC-6001 with a full travel alternative, as seen on with other NEC machines of the era.

Shortly after release the mkII became the de facto PC-6000 series machine, and despite being succeeded by the PC-6001 mkII SR, it contined as the platform of choice for software developers. NEC would also release the PC-6601, which is almost identical to a PC-6001 mkII and can run the same software; connecting an external 3½-inch floppy disk drive to a PC-6001 mkII essentially turns it into a PC-6601, save for minor differences in audio.