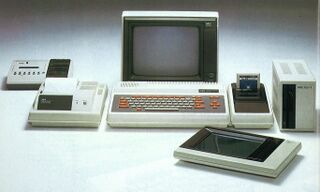 The PC-6000 series began with the launch of the PC-6001, being offered as a cheaper alternative to NEC's more high-end PC-8800 series which debuted around the same period, and in some ways replacing the PC-8000 series which had debuted some years before. Throughout its lifespan, this line was marketed as the entry level option for NEC computers - the PC-8800 series occupying a middle ground and the PC-9800 series being offered as high-end machines, neither set of machines being compatible with the others.

This category has the following 2 subcategories, out of 2 total.

This category contains only the following page.